Early legends of Rome – were they later inventions? 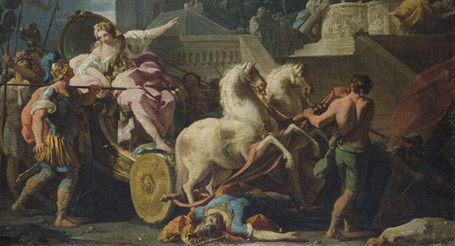 The origins of Rome emerge from mythical beginnings (Aeneas, Romulus and Remus), then legends, for example, in the 6th century BC Tullia driving her chariot over her father’s body to help her husband Tarquin become king (pictured here by Antonio Gonzalez Velazquez), the same Tarquin’s overthrow by the first consuls, Coriolanus in the 5th century, an invasion by Gauls at the beginning of the 4th, and so on. However, nothing is written down until the 3rd century BC, which has tempted some scholars to assume these later writers were very inventive and retrospectively created stories for political reasons. Christopher Smith is not the only highly regarded classicist to take this view:

“Even if Romulus and Remus are older than this, it is clear that when the Romans started writing about them, they were also thinking about other mythical foundation stories. By 275 BC Rome had already resisted a great Hellenistic monarch, Pyrrhus of Epirus who was well-known to the Greek cities of southern Italy and Sicily, all of which had stories of how they began. Rome needed a good foundation story too … Early Rome is a screen onto which Roman writers could project their obsessions and stereotypes.” [1]

It is true that what we read in Livy and elsewhere cannot be taken as fact, especially his account of the early years. But the idea that Romans invented foundation myths when they first started to record stories on papyrus is a coincidence I struggle to accept. There is no reason to suppose that the point when their stories become visible to us is when they were first shared.

Tales like this generally come out of the mists of the past, from uncertain provenance. Later storytellers and the first writers will have selected and shaped these stories to please their audiences and masters, but similar pointing had surely been going on for generations – if orally. I think of our digital media: this did not introduce the first political lies, just made them easier to communicate.

Were Romans of the 3rd century BC, who were the first to read and hear tales written down, so credulous that they accepted new stories of their beginnings? I cannot believe it works like that. An oral tradition may be beneath our radar, but its strength should not be undervalued. If I orally relate the story of ‘King Arkwright and the Knights of the Round Table’, I’d expect an instant challenge. Who knows, a weary scribe might easily make such a slip.

[1]  ‘Kings, Romans, countrymen? Were the Romans ever ruled by kings?’ by Christopher Smith in the 78th issue of Omnibus.