The Song of Arms and a Man

The Song of Arms and a Man presents Aeneas’ struggle to fulfil his destiny as founder of Rome – from his escape from the burning ruins of Troy to his asylum and heart-breaking affair with the Carthaginian queen Dido and his reluctant war with the inhabitants of his fated homeland of Italy.

Selections of Virgil’s epic verse are read in the original Latin interspersed with an English narration which tells the whole story of the poem. This innovative and acclaimed presentation of a rarely heard masterpiece echoes the ancient culture of public performance of poetry. Scroll down to see feedback from the performances so far.

Matthew Hargreaves reads from Aeneas’ visit to the underworld. 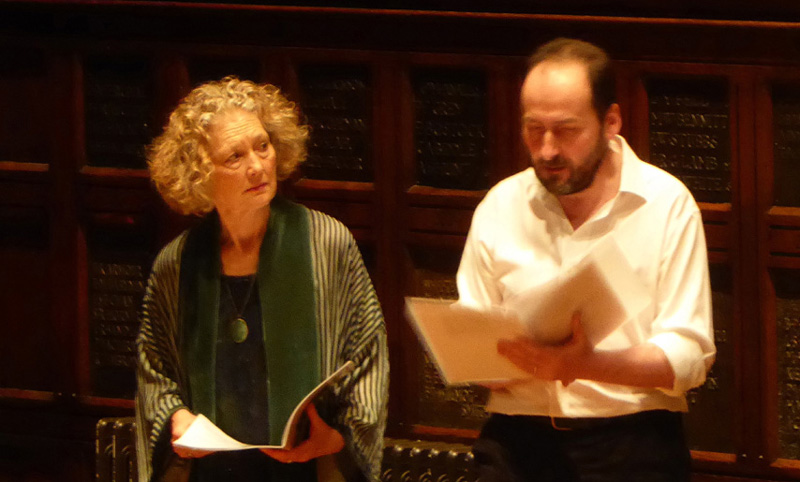 What audiences have said so far

It was phenomenal. Lots of our students were in the audience – thank you for inspiring them. I was spellbound and the two hours went by very quickly.  Guildford High School – Twitter

It was wonderful to hear so much of the Aeneid performed this evening and to romp through the story from start to finish. The cast of The Song of Arms and a Man did a brilliant job bringing the text to life.   Andrew Christie (Twitter)

What a superb evening it was! Spellbindingly good.  Nic Aubury (Twitter)

The editing and pacing of the abridgement was masterly, and the interleaving of narration and recitation worked really well.  Prof Philip Hardie, President of the Virgil Society

Its appeal to a wide audience is not difficult to imagine, even if one does not have any Latin; it is, in short, a rollicking tale.  Linda Martinez

A magnificent performance – and the programme was superb.  Conrad Donaldson

The Song of Arms and a Man is an enthralling and exciting performance, and such a treat, to hear the nuances and power of Virgil’s original Latin, but so engagingly done thanks to the involvement of such experts – not only in the pronunciation and meaning of the Latin, but also in the timeless communication of the characters’ personalities and foibles. I enjoyed this evening enormously, and I would say that for anyone interested in the Aeneid, it is an absolute must-see!  Andy Keen, Head of Classics, Bristol Grammar School

Wow, what a fantastic way to spend a Saturday evening! Thank you to the Guildford Classical Association and the Latin Qvarter for putting on such a powerful performance of the Aeneid. A most memorable experience for our classics department and pupils!  Surbiton High School

Your Virgil production was one of the highlights of my last three years in Bristol; I can still hear Llewelyn’s voice speaking the words so beautifully. You have done as much as anyone to bring the beauty of classical languages to a wider public, and all of us who study them are in your debt.  Prof Patrick Finglass, University of Bristol

How exciting to hear a real aulos player! The English narrative beautifully echoed the original Latin and set the scene for the Latin extracts. It was entrancing seeing such well-known passages brought to life – acted out and performed in impressively fluent and expressive spoken Latin.  Guildford Classical Association

Pupils of Hills Road School in Cambridge were so struck by our performance at St John’s College that they very sweetly collected and sent in their feedback (unsolicited!), of which here is a sample:

Despite no prior knowledge of Latin, the performers managed to speak so fluently that I was often mesmerised by their dialogue and enjoyed it thoroughly. The programme and production have been really useful in learning for next year/gaining the perspective of contemporary audiences.

The reading and performance aspect really brought the poem to life for me, and I’m glad I had the opportunity to hear it in the original Latin but presented in an accessible and engaging way.

Despite not having studied Latin for a few years I found my interest rekindled as it was read so wonderfully and so beautifully to the audience.

It was very interesting and I am pleased we now have some background knowledge for Year 13.

It was one of the most accessible and interesting performances I have seen of a Latin text. Wonderfully acted.

George Sharpley, creator of The Song of Arms and a Man, talks about Virgil, The Song, and the team of performers who’ve made it happen.

“All sorts of people in the ancient world enjoyed these poems. By no means were they limited to an elitist highly-educated readership. Whether you were able to read or not, you would hear these poems read aloud. And what a treat! Poetry continued to be recited – and to some extent performed – long after it was first written down. However ‘literary’ Virgil, Ovid and others have become between their time and ours, the magic of their voices is for me the most thrilling dynamic to come out of their world.

“Virgil’s Aeneid is truly extraordinary, and now almost entirely silent. That simply had to change. I’ve felt this for a long time, and once I found people with the talent and heart and enthusiasm to join this journey, we were off. The Song of Arms and a Man has had five outings to date, starting at Gloucester, then Bristol, Oxford, Charterhouse, and Cambridge. At each venue we have had a very positive reception – various comments are listed on this page, and how encouraging that they come from people with widely different experiences, from classics dons, teachers, students, pupils, and from people new to Latin. It is a joy to see how Virgil has already found many new friends, and persuaded old acquaintances that time spent at school struggling with the language is not a fair representation of our poet!

“Here are members of the group, in the order they joined:

“The bass-baritone Matthew Hargreaves stayed overnight with us a few years ago after singing at Gloucester Cathedral, and during a convivial exchange in the early hours promised to come back and learn how to read hexameters. During that first visit I recorded his wonderfully sonorous voice – and the recording remains on our website here. Matthew reads Jupiter, and also many of the tales of battle and loss and sadness. To hear his Evander lamenting over the body of his son is worth the entrance money alone.

“Then the soprano, performer and champion of baroque music, Emma Kirkby joined the project. Dame Emma is not only a singer but a classicist of some standing. Throughout her career, Latin has never been far way. As I  stumble about the stage to put on Priam’s armour, Emma reads Hecuba’s sad appeal to him to take shelter from the Greeks – from where I flounder, a thing of exceptional beauty; then Creusa’s heartbreaking words of encouragement to Aeneas, and later poor Euryalus’ mother, who sees her son’s remains displayed by the enemy. And never far from the action is Juno…

“Now, as the project was gathering momentum, I set about the adaptation, and a little later the translation. Soon Edward Gillespie, recently retired from a career as the longest-serving sports’ manager of all time (over three decades as manager of Cheltenham Racecourse), brought his theatrical and production acumen to the project.

“Llewelyn Morgan (Aeneas, Turnus) was recruited after one of his annual appearances at the Cheltenham Literary Festival. We are lucky to have Llewelyn in the group: he loves Virgil and reads the verse beautifully, but he is also extraordinarily busy, a classics don teaching at Oxford, where he is Vice Principal of Brasenose College. On top of that he frequently goes to all corners of the country to address schools, colleges and Classical Association branches, where his talks inspire classics students across the land. Llewelyn reads both Aeneas and Turnus, not to forget Vulcan, melting before Venus’ gentle persuasion.

“A richly resonant dimension is added with aulos music from Callum Armstrong and Barnaby Brown. It is easy to appreciate how such music must have been close to performances of this kind, adding notes of celebration and joy, and, more pervasively, enriching moments of sadness. For me as narrator it is all too easy to weep as those final notes are played.

“And there have been others involved, with several appearances from the brilliant Lizzie Donnelly, unforgettable as Venus, Dido, the Sibyl and others. Lizzie also helped so much with production at Cambridge. In Gloucester there was Steve Wright, a fearsomely angry Turnus, and Eileen Zoratti, who has given several bright cameos as the warrior maid Camilla; and for Charterhouse we were joined by Victoria Punch, at very little notice, who won the hearts of the audience with a terrific performance.” 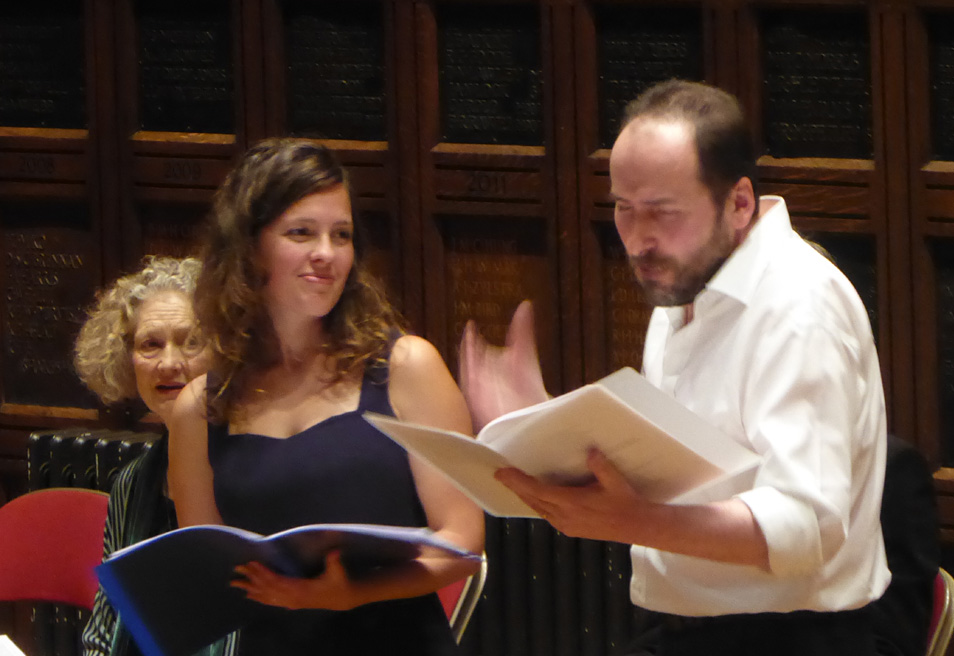 Photos by Bryan Conway of the Guildford Classical Association