George Sharpley on the spoken word in the ancient world. 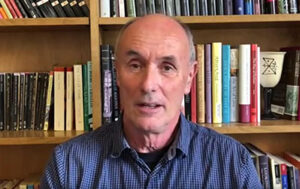 Readings from The Complete Latin Course

The Song of Arms and a Man

Guidance on Latin pronunciation and metre

The sound of Latin may be secondary for students of medieval history or exotic diseases, but anyone wanting to get to grips with Classical Latin is well advised to make the sound of the language as much a priority as the grammar and vocabulary.

To some this may seem a touch artificial, or even pointless. Can there be any knowing how the language sounded? And does it really matter? No one speaks it any more. The speech of the Romans has long since passed away into the next generation of Romance languages: French, Spanish, Italian and Portuguese. Latin as a spoken language never engaged scholars in any case. The huge pull of the Classics over the past two thousand years has been the great writings of poets and historians, and the gulf between literary style and colloquial chat was as wide in this culture as in any. Rhetorical and poetic conventions in literary composition raised these works above ordinary speech, and this is what we read today.

It cannot be denied that the Latin we study is on the face of it a very quiet language, recorded in books only a few people read or on silent inscriptional stones. However, the silence of the intervening centuries creates a wholly misleading picture of Classical Latin literature, which in its day was principally heard, not read silently. If someone like Cicero spent an evening reading, more than likely he’d have been listening to a reader. Many classical works, prose as well as poetry, were transcripts of oral performances.

The first Latin literature as such appeared in the 3rd century BC; but it did not start from cold. It was already well warmed up by the previous and concurrent oral tradition of dramatized storytelling. A tantalizing glimpse of an ancient poet at work comes from Dio Chrysostom (1st century AD). He describes a scene in the Hippodrome: “I remember seeing a number of people in one place, each one doing something different: one was playing a flute, another dancing, another juggling, another reciting a poem, another singing, and another telling a story or myth; and not a single one of them prevented any of the others carrying out his own business” (Discourses 20.10).

Poets were public performers. Their audiences might easily extend beyond the literate community. It is no surprise that Augustus wanted poets like Virgil and Horace on side if their work was appreciated far beyond the few who obtained a written copy. And it explains why there were no published female poets, or very few. Seldom would a woman appear in public to give an address of any kind.

Dio Chrysostom mentions a storyteller as well as a poet. What makes a poet literary is not so much that he is read whereas a storyteller is heard, but that his performance is recorded on papyrus, and then able to be repeated or studied, with a claim established to authorship. The oral storyteller on the other hand is beyond our radar; his work has not been preserved. Even so, his popularity was not limited to ordinary folk: Suetonius tells us that Augustus would summon a storyteller at night if he could not sleep (Aug.78).

The longstanding distinction between the ‘oral’ poetry of pre-classical Greek and the later ‘literary’ creations of poets like Virgil needs to be treated with caution. We think of Homer’s Iliad and Odyssey as oral epics, because they very nearly are. They are the closest we get to oral poems of that time; but they are in fact pioneering triumphs of a literate society, if drawing on an oral tradition from the world around them. And Virgil’s Aeneid, the fruit of a poetic culture at ease with scrolls of papyri and the study of letters, is a good deal more oral than we might think. By the 1st century AD we hear of booksellers; and we know that poets shared their work with individual contemporaries; and that their works were used for study and imitation. So gradually, very gradually, a broader picture emerges of people reading poems in quiet isolation. But for hundreds of years after the first Latin poems were written down, most people experienced them aurally.

So it is that the sound of Latin you are reading or studying or teaching should be right at the heart of the process. There is little value in a ‘literary’ appreciation of these authors that remains deaf to their voice. And worse still, there’s no pleasure.

Which brings us back to how do we know. A recording of Cicero making a speech or Virgil reciting his poetry would be a fine thing. The best we can do twenty centuries later is tentatively reconstruct the language, letter by letter, syllable by syllable, from various bits and pieces of evidence. There are areas left to interpretation, but thanks to a considerable accumulation of scholarship we know enough to proceed with some confidence. Especially the verse. For this comes with such a tight set of conventions the instructions are almost written for you. Of course there are uncertainties and different modes of practice; but that can be said of many other languages we routinely recreate, such as Shakespearean English.

We would be hard put to identify one model pronunciation in any case. Latin was the first language of the empire of Rome, which lasted for half a millennium, and stretched from the Crimea to Spain, Edinburgh to Egypt. Latin speech habits will have varied according to period, region, social and ethnic background, as in any language.

Evidence comes in many forms: what contemporaries and later writers wrote about the language; what has survived in inscriptions or graffiti, or in puns, or habitual spelling errors; what can be deduced from transliteration into and out of Greek; what evolved in Latin’s offspring languages; and, not least, the metrical framework of poetry, which tells us much about individual letters and also syllabic stress.

It will not take too much application to make this experience successful and pleasurable. Listen to others, study the guides, and practise. Start with just a line or two, then try one or two more. Once you ‘get it’, you’ll be up and away.

If you are interested in the orality of Latin literature, I recommend T.P. Wiseman’s The Roman Audience (Oxford 2015). For a summary of the evidence and a guide to pronunciation, see Vox Latina by W. Sidney Allen (CUP 1978).