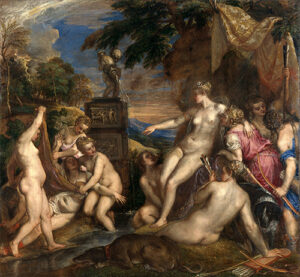 We can clear up one popular essay question quickly – is the Metamorphoses an epic poem? The answer is yes, the Metamorphoses is an epic, just not one quite like any other before it. Ovid is of course teasing us a little, inviting us to wonder. His poem has all the obvious ingredients, mythic tales, heroes, gods, magnitude (fifteen books to the Aeneid’s twelve).

Where other epics may focus on a particular event or story, the Metamorphoses offers a collection of them, and because we tend to treat the poem as a go-to compendium of ancient myths (which it is), it is possible to lose sight of the whole. The Metamorphoses tells the story of our creation, and you cannot get more ‘epic’ than that.

Is the Metamorphoses lighter and more fun than the Aeneid? Many have thought so. Especially if you step through the poem choosing your episodes carefully. Yet read in its entirety the Metamorphoses can be a challenging journey, sometimes disturbing and often dark. ‘Love’, the energy behind the universe, is the unpalatable agent behind the majority of tales, and hardly any are told without a touch of the grotesque or macabre or cruel. Callisto, pictured above with Diana and her nymphs (Titian), is raped by Jupiter and then discarded by Diana for being so compromised. Indeed the world of the Metamorphoses, once created, seems to gather its energy from sexual assaults by gods on various nymphs and girls. Not even the rare story of a love shared, the mutual love of Pyramus and Thisbe, escapes bathos in the image of a hissing pipe as blood spurts from Pyramus’ self-inflicted wound.

The poem begins with the creation of life itself reaching by the end the world of Rome under the Caesars. Along the way we are engaged in one story after another. These stories of transformation are not just neat and clever, but ooze metaphoric value, where we came from and where we go.

Do not expect a serious appraisal of our environment. Ovid is no David Attenborough. He is urbane, playful, clever, teasing. As for light-hearted, it is true he can treat grim stories with a light touch, but do not be fooled by the story-telling persona he creates for himself – his soul is fully immersed in this undertaking.